I write this with trepidation, since I think people invest a lot in their own preferred voting schemes. But I believe I have a novel proportional representation voting method, so I'd like to share it whether it is good or not. I have not encountered an approval voting method for multi-seat elections, so here goes.


This is somewhat like a jungle primary, except there is no runoff. (The top two system does seem intriguing.) Here is an example. 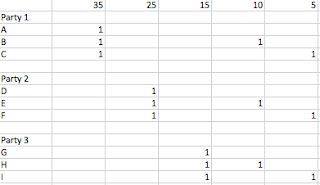 The columns headers show the sizes of voting blocks. Out of the 90 total voters, the biggest plurality, 35 voters, prefer Party 1. A block of 10 voters prefer candidates B, E, and H; a block of 5 voters prefer C, F, and I. Obviously, Party 1 deserves at least one seat, possibly two; Party 2 might deserve just one seat; and Party 3 might be below the threshold to get a seat at all. But which candidates from each party?

The "1 pt" column indicates what would happen if only the voter's first approval counted. The next column indicates the tally method I described above. Some comparisons are interesting: ABF is a higher-scoring combination than ABE -- sure, the block of 10 voters is happier having two candidates of whom they approve, B and E, but the ABF combination brings in a candidate whom the block of 5 voters like.

The ultimate winners are B, C, and E: two seats for Party 1, one seat for Party 2, and zero for Party 3. Now, before anyone says that this is unfair for this or that reason, just remember that no voting system is perfectly fair. Kenneth Arrow wrote about voting systems and proved that no system could simultaneously meet all three of his sensible criteria. Instead, let me just lay out some of my choices in creating this method.

Why did I choose approval voting? A: I think you open it up to a lot of strategic voting if you allow people to rank candidates -- people can choose to tinker with their votes down toward the bottom of their list to give their own preferred candidates at the top of their list the best chance of winning. I'm not sure that the same can be done with approval voting. Let's say I'm a hard-core partisan of Party 1. I know that realistically my party is likely to win one or two seats, but not three. I might be tempted to use my third vote to influence the candidate who gets chosen in Party 2 (thus voting, perhaps, ABD in the above scenario). But I have to realize that the voting method cannot tell that I dramatically prefer A or B to D. It makes the gamble riskier, I think.

Why did I choose only three votes? Short answer: Because there were three seats. Long answer: I think that this constraint forces people to think carefully, and my gut says it makes it even harder to vote strategically. As a variant system, I think it might be interesting to consider giving each voter (seats - 1) votes, so in this case, two approval votes. The reason would be to force each partisan voter to indicate which candidate in his own party he least likes. This actually puts more power into the party supporters', not the party leaders', hands.

Why did I choose the "first candidate approved of equals one point, while second candidate approved of equals 1.5 points?" A: The reason that I set up the point values that I did is so that it is worth more to get voter A one candidate whom he likes than to select for voter B the second candidate whom he likes. In this way, this voting method tries to get everyone one representative, before it tries to get anyone a second representative. The pattern would continue: 1, 1.5, 1.75, 1.875, 1.9375 . . .

I have not done the math to see what all the ways to strategically vote are, but my guess is that in the end, the smart "game play" for a party is to nominate candidates who can attract swing voters. In my scenario, the 15 total swing voters ended up deciding where the third seat went and also deciding which candidates got elected from each party. In the real world, perhaps this would mean that a multi-seat district could be representative (in the sense that most voters approve of at least one of their representatives) AND competitive (in that the swing voters always produce some fluctuation). The idea I'm most attracted to is that even a popular party's incumbent could be thrown out. In the above scenario, just assume for a second that candidate A and B are their party's incumbents. Perhaps A was involved in a scandal. Party 1 still might retain one or two seats [they have the block of voters to do it], but disgusted swing voters can make clear that candidate A must go.

I welcome any scenarios readers come up with to show weaknesses to strategic voting in this system. Please share them.

On an interesting note, ranked choice has the problem of complicating things too much for voters. Of course, in the article, the larger point is the critique that a desire to change elections is often actually motivated by a desire to change politics. But repressed interests won't always naturally bubble out. People might not spend the time to learn about the candidates. People might still vote in habitual, not considered ways.

This is a fair point. A new system of voting should be simple. Approval voting, with the option to vote down a party line, fits that bill. If one was really concerned about overvoting, one could drop the limit on how many candidates a voter could approve of; even if a voter approved of every candidate on the ballot, it would still be valid. Certainly, approval voting would have far fewer problems with incorrect ballots that ranked choice. And it doesn't require extensive knowledge of the candidates like range voting.

As to the other part of the critique, I do think proportional representation would actually change our politics. So I'm guilty of some optimism there. The reason is simple, though: proportional representation would probably create a 45-45-10 political system, where the numbers stand for Democrats-Republicans-Third parties. I think the Green Party, the Libertarian Party, and on and on would bring policies to the table that are missing. Nothing magical. Just a more open debate.

UPDATE, March 15, 2019: As my good friend Dr Paul Snell pointed out, my system definitely creates an opportunity for voters to vote strategically. A voter who wants to give their favored candidate the best possible chance should only vote for that candidate. That means there's only one way for the method to "score" a point for that voter, as opposed to someone who's voted for three different candidates. The latter voter's approval is more diffuse and the voter can be "satisfied" by more different outcomes. If everyone votes in this strategic fashion as the first voter--voting for only their top candidate--then the method reverts back to first-past-the-post.
Posted by Russell Hanes at 6:01 PM