As many debate coaches and competitors already know, because teams are always power-matching within brackets against opponents with the same record, it is possible to construct a simple branching diagram to predict how many teams are in each bracket, like so:

and so on. What they may not realize is the connection to Pascal's triangle, a famous problem in mathematics: 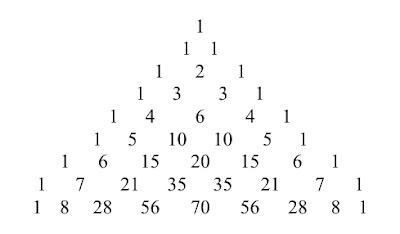 Here are the first nine rows. Each number in a row is created by adding the two numbers in the row above, the number diagonally left and the number diagonally right. The numbers in each row can easily be turned into percentages by dividing a number by the total of the row. For example, in row one, 1/1 is 100%; in row two, 1/2 is 50%; in row three, 1/4 is 25%. As you might have noticed, the total for each row is always 2^(n-1), where n is the row number. (There's also a shortcut for finding the numbers in the rows.)

Once everything has been converted into a percentage, it can be organized in a more easy-to-read chart: