Another way to visualize strength-of-schedule pairings

I've written about a type of pairing I call a strength-of-schedule pairing. The basic idea is that a team that has had a weak schedule so far (measured by opp. wins, opp. speaks, etc.) gets a strong opponent for the next round. (Of course, all of this is within a bracket, so weak and strong are relative to the average team strength and schedule strength in that bracket.) It sounds simple enough, but it has to work both ways -- both teams get the opponent they deserve in each other.

It hit me how to help people visualize how this pairing method differs from the traditional. First, picture a Cartesian grid, depicting one bracket, like so: 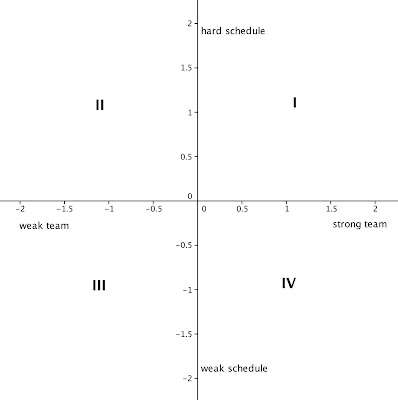 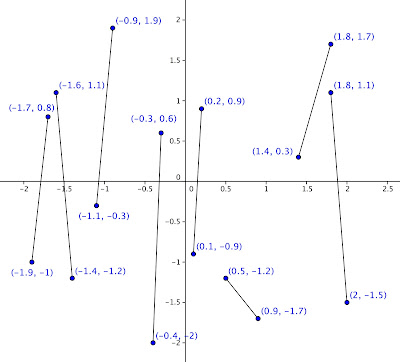 The best team faces the second best; third, the fourth; on down to the second worst facing the worst. Two debates are matched between quadrants I and IV. These are unfair to quadrant I teams, who are good teams, with tough schedules, facing yet another good team. There are four debates between quadrant II and III. These are unfair to quadrant III teams, who are weak teams, with easy schedules, facing yet another weak team. I'd say there's really only one good match: the quadrant IV team to the other quadrant IV team. All in all, many of these debates are likely to exacerbate the range of schedule strength teams face. Score: 1/8. 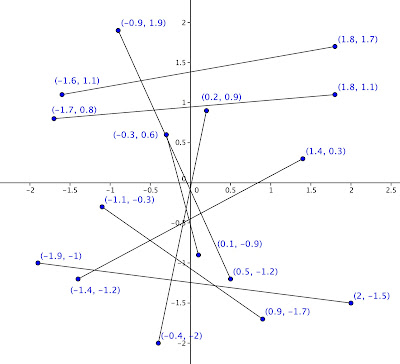 Here's what a strength-of-schedule pairing looks like, for the same points: 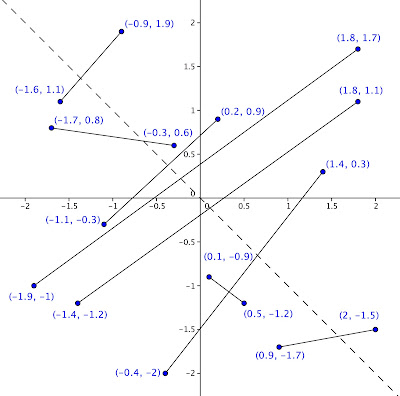 I didn't tweak it! This is what came out of my algorithm. All eight matches accord with the preferences I spelled out: Is debate IIIs, IIs debate IIs, and IVs debate IVs. I added in the dotted line to show that most of them have this rough symmetry, where the x score of one is nearly as possible -y of the other, and vice versa. Given the random distribution of the points, it's pretty darn good. All in all, this will equalize as much as possible the schedule strength faced by each team in this bracket. Tough schedule? Weak opponent. Easy schedule? Strong opponent. Score: 8/8.
Posted by Russell Hanes at 1:58 PM