The most interesting example is the middle term in a row, e.g.:

1
1 1
1 2 1
the 1 and 2 are middle terms for their respective rows. The middle term is always the largest term and grows quickly. So, which grows faster: the row total or its middle term, or is there a convergence? A few examples illustrate what happens: 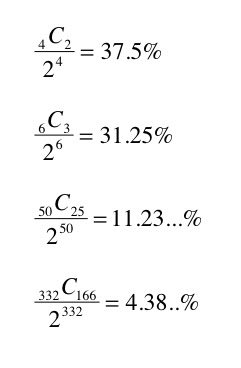 Can we write a proof of this? Certainly. The first step is to re-write the numerator. Given that the combination is really a simplification of

so, our specific numerator can be re-written as:

To re-write the limit for our whole expression, the middle term divided by the row total, would look like this:

Now the clever step. Let's re-organize that n factorial in the numerator and expand the terms in the denominator:

The proof is basically done. One simple re-write makes the final conclusion clear:

Each fraction is now on its own. The first set of fractions are all 1s. Every other fraction must be less than 1. An infinite multiplication of fractions less than or equal to 1 must converge to 0. So, in an infinite Pascal's triangle, the middle term, although it increases without bound, is 0% of the row's total.

The above paragraph is incorrect. A lot more work must be done to show that the product of the remaining fractions

goes to zero. I like explanations that just make intuitive sense. So, the first term is 0.5. I noticed that the product of the next four terms (terms two to five) is slightly less than 0.5. A little cancelation helps make why clear: 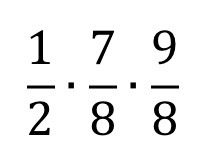 A litte cancelation starts the process:

and reorganizing the denominators makes the result clear:

The product of the next 64 terms is also less than 0.5. (The number of terms is based on powers of 4.) So, the whole product can be rewritten as 0.5^infinity... that definitely goes to zero.
Posted by Russell Hanes at 5:25 AM