For any triangle, the incenter is the center of the largest circle that will fit inside the triangle, like so:

A Pythagorean triple is a right triangle with whole number sides, such as a 3-4-5 triangle. I found by accident that the radius of the incircle is always a whole number, too (not a fact listed on Wikipedia but listed on Wolfram MathWorld). There is an additional element to the pattern.

Here is the first dozen Pythagorean triples, by length of shortest side. As you can see, as the shortest side gets longer, the incircle radius does, too, although this pattern is not consistent.

It turns out that every Pythagorean triple (a, b, c) can be written in the form

where r and s are any two positive integers such that r > s. So the chart can be amended to this (side a in bold italics):

Then I swapped rows 9 and 10 to make the pattern clearer: 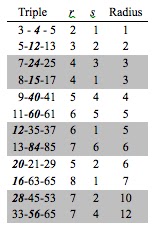 The key was recognizing that the quantity r - s is meaningful: 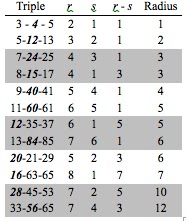 As is clear, the radius is s * (r - s). Now to go about proving it. Let's start by creating a generic Pythagorean triple right triangle, like this: 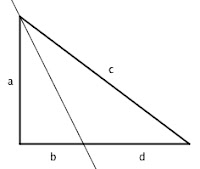 So, in our Pythagorean triple triangle, the angle bisector sets up the ratio

Therefore, the angle bisector passes through the point

and has the equation

This confirms the result from the table. Since both r and s were integers to begin with, s * (r - s) is also an integer. Every Pythagorean triple right triangle has an integer incircle radius, as well.

One neat property of the incircle (for all triangles) is that the area of the triangle is equal to 0.5 (incircle radius) * perimeter. Observe: 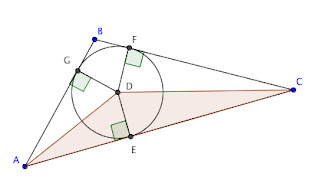 On any Pythagorean triple triangle, we know:

Given our property for the incircle on any triangle, we know:

which confirms what we found before!
Posted by Russell Hanes at 6:43 PM