The gerrymandering of U.S. congressional districts is a problem. First, it is simply at odds with democratic principles to have our representative choose us. Gerrymandering can lead to extraordinarily safe districts and can slightly tilt the balance of the whole state delegation. We get less turnover (fewer competitive races) AND skewed results. (Vox has a great series on gerrymandering.)


Second, there's the appearance of corruption, unless the redistricting process is handled transparently by a nonpartisan committee (and these are few and far between). Even when a nonpartisan committee does try to do the redistricting fairly, it's hard to do: districts are supposed to be geographically compact (a smaller perimeter/sqrt[area] is better); minorities are supposed to be given a voice (so create some minority-majority districts); and some districts are supposed to be competitive (so, near 50-50 splits). But here's the key problem: a district can be represented (a representative speaks for the overwhelming majority in that district) OR competitive but not BOTH at the same time. I have a simple solution: Elect U.S. congresspeople in at-large races in each state, like senators. (Article here.)

There's nothing in the U.S. Constitution to prohibit it: it's up to states how to elect their representatives: "The Times, Places and Manner of holding Elections for Senators and Representatives, shall be prescribed in each State by the Legislature thereof..." (Art. 1, Section 4)

This change would allow states to use a proportional allocation method. There are all sorts of methods, but the simplest one to imagine starts with each party putting forward a list, in order, of its potential delegation. If the Democratic party wins 4 seats, the first four people on the list become U.S. representatives. (Obviously, being toward the end of the list is an honorary thing, since it's very unlikely one party would win all the seats in a state.)

Again, there are all sorts of ways to let people vote in these kinds of elections. One way is that a voter could receive a ballot that gave him one of two options in voting: a straight party line vote, and picking and choosing from the various parties. Say John is voting in Colorado's election (7 representatives). He could vote down the Democratic line, for their 7 candidates, or he could vote for any 7 candidates he liked, regardless of party. I think for simplicity and to avoid strategic voting, it's best to make the voting unranked; this would be approval voting. (The mathematics of proportional representation tallying are fascinating.)

Proportional representation gives third parties a better chance to win at least one seat. It allows ideologically unified but geographically spread minorities to build a voting block. And there are no districts to draw.

While it would be reasonable for Colorado to treat the state as one delegation, it's hard to imagine California (53), Texas (36), Florida (27), New York (27), Illinois (18), Pennsylvania (18), or Ohio (16) doing it. I think electing no more than a dozen at-large representatives is best: it gives third/minority parties a good chance, but isn't overwhelming to the candidates and voters. These large states would need to be subdivided. The key criteria would be creating geographically and economically cohesive units, transparency, and stability (with luck, the zones could exist without modifications for two or three census cycles).

Perhaps the most obvious way is to divide along county lines. Here's a possible zoning map for California: 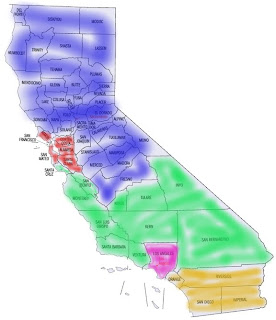 It's possible to imagine other ways to partition it (FairVote recommends 3-5 seat districts), but the voters/reps ratios are fairly consistent across the different zones. How did I do on geographic compactness? (One random note: apparently U.S. courts do not have an agreed-upon formula for measuring compactness! Follow the link to a very informative website.) Using my own formula perimeter/sqrt[area], most of the zones are decent: 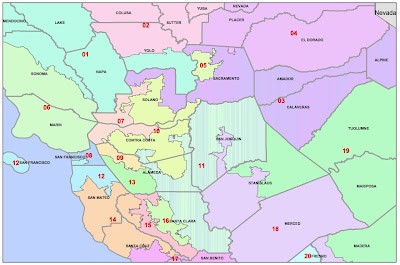 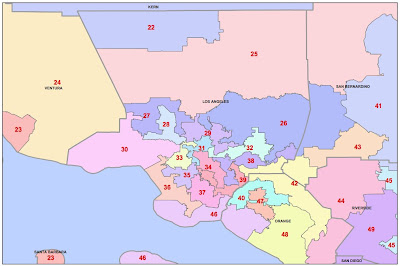 For those who think computer programs can repair the problems, think again. And I reviewed critically a different possible solution, hands-off redistricting, here.