I read Chester Finn's article on The Atlantic's website with some curiosity; it seems to make so many different points that it is hard to follow his overall idea. I guess, therefore, I will go through the points in order.

First, Mr. Finn states that private school enrollments are down 13% since 2000. I looked at the same data; this is true. But it obscures a more interesting point. Using the same data, I put together this chart: 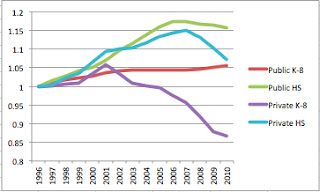 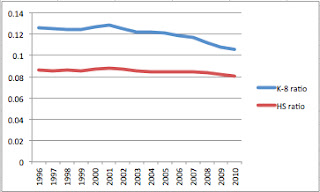 Why? I do not know much about this topic, so I read the Census Bureau's paper Mr. Finn linked to. The author wrote, "While there was a decline in enrollment for Catholic and other religious private schools, there was an increase in enrollment for nonsectarian schools, although the increase was not statistically significant." And furthermore: "there is some evidence that growth in the charter school movement has contributed to the decline in private school enrollment." Here is the map that supports this notion: 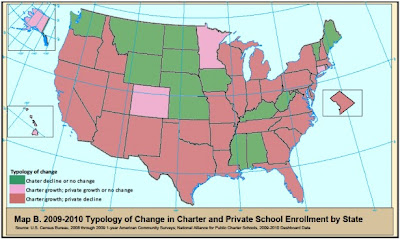 The states in red show charter school growth AND private school decline. In very broad terms -- oversimplifying quite a lot -- perhaps more parents are pulling their children out of Catholic and other religious K-8 schools and putting them in charter schools. Intuitively, it would make sense that Catholic schools (annual tuition: ~$6,000) would in the most direct competition with charter schools (and the $30,000 - $40,000 elite, secular private schools would be competing against each other, not against Catholic or charter schools). As Mr. Finn himself points out, "elite private institutions are doing just fine, many besieged by more applicants than ever before." He goes on to say that, "Behind [the success of elite private schools], however, like the Wizard of Oz's curtain and Potemkin's building facades, there is much weakness, a weakness that probably afflicts the vast majority of today's private schools and colleges." But Mr. Finn has lumped so many different kinds of schools under the term "private" -- religious and secular, K-8 and high schools, and even colleges -- that this conclusion is meaningless.

The Atlantic also had a fascinating article about Philadelphia's Catholic schools, an article that gets to the heart of the push and pull between Catholic and charter schools and that probably does a better job of explaining the changing nature of American schooling than Mr. Finn's overgeneralized data analysis. While charter schools are certainly popular with many parents, there is also the question about whether charter schools are effective (or here or here). The short answer is probably yes, but with many qualifications, but Mr. Finn does not address this question at all.

His article then pivots, for no discernible reason, to massive open online courses (MOOCs). He seems to be making the point that MOOCs are going to obviate the need for private college, but I might not understand his point at all. The problem is that MOOCs deliver a less engaging experience; the dropout rate is terrible (from Washington Monthly):


Given the current 90 percent dropout rate in most MOOCs, an 8-point gap in completion rates between traditional and online courses offered by community colleges, the 6.5 percent graduation rate even at the respected Western Governors University, and the ambiguity of many other higher education reform ideas, there’s good reason to think that an unbound future might not be so great.

There is a clear equity issue; as the same author states, bringing new students to a higher education composed of MOOCs is not really expanding access to college. A second article in Washington Monthly makes similar points, comparing enthusiasm for MOOCs today to enthusiasm for community colleges in the twentieth century -- arguments were made for expanding access to education, but the community colleges became the province of low-income students. And there are many others raising these concerns. San Jose State suspended their experiment. Perhaps the best article I've read about these equality concerns is from Stacia L. Brown, a community college teacher, who writes in The Atlantic: "When discussing the rise of online learning and free massive open online courses as waves of the future, many ignore the dynamic a classroom like mine provides for a population often left behind." A longer essay makes the same point.

I would not bash the experiment -- MOOCs -- before they have really been tried, and before people have had the chance to refine and improve the model as much as possible. But I merely bring up the point that many people are concerned about them because Mr. Finn does not voice these concerns in any way. Furthermore, I think Mr. Finn's enthusiasm for MOOCs reveals his underlying assumption that schools are information-delivery systems. He states:


One can also fairly ask whether U.S. private schools and colleges are really all that different from their public-sector counterparts. In practice, their education-delivery model is practically indistinguishable, save for the accoutrements that the wealthiest of them can buy (trips to faraway lands, nifty technology, tiny classes, etc).

This is -- I can't say this any more politely -- nuts. Private schools use textbooks, classrooms, and real, live teachers, as do public schools, so they are the same? It is like saying all restaurants use stoves, ovens, pots, pans, and the same basic food ingredients, so are "practically indistinguishable." As the research on charter schools (and on Catholic schools, and really on all types of schools) indicates, the culture of the school is enormously important. The stated goals and focus of school administrators' attention, the expectations of teachers for students, and the expectations of students for themselves matter are the very heart of what a school is. This is what makes one school different from another, not the mode of delivery.

Schools do not, as their primary purpose, deliver information; their primary purpose is practice, critique, and discussion. Perhaps reflection, too. Schools with a good culture accomplish this -- and there are myriad paths to a good culture. Schools with a poor culture fail at it -- and there are many ways to fail. One way, it can easily be imagined, is to create an online course with little opportunity for the student to get useful, timely, personal feedback during the semester.

Furthermore, I think the label "private" in no way guarantees a certain culture; same with the label "public." A good public school has far more cultural similarity to a good private school than to a poor public school. The labels are a fairly meaningless guide to culture; they only indicate who is paying.

Mr. Finn's final question -- "Can run-of-the-mill private schools and colleges reboot? Can they change themselves -- including both their delivery systems and their cost structures -- enough to brighten their own futures?" -- is the wrong one. The right one is: can run-of-the-mill private and public schools find ways to improve their school culture? As the charter school movement has shown, it is possible but quite hard, especially to replicate at scale.
Posted by Russell Hanes at 6:10 AM