Every day for five years, I drove through the most confusing spaghetti set of interchanges in the world, around Arlington National Cemetery and the Pentagon in northern Virginia. It is a bold claim, I know, but in an approximately four square mile area, there are: two interstates, four major divided/limited access highways, four bridges over the Potomac, and about two dozen interchanges. Of these, only one is normal, eight-way interchange. The other 20 interchanges all have some restriction: for example, there is an exit for northbound but not southbound traffic. Here, check out Google Maps for yourself: 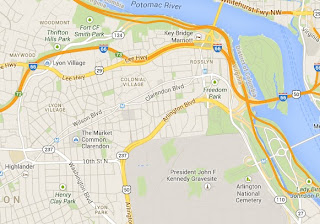 Google Maps will navigate you through correctly (it has the correct information on the interchanges programmed in), but you can not tell anything about the interchanges from a static map. To help myself, I made an interchange (node) map: 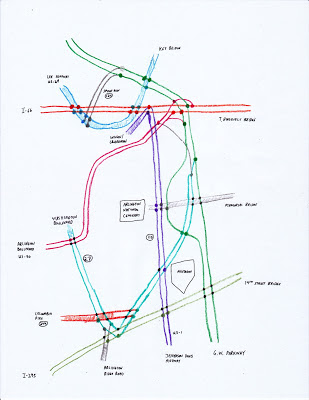 Please let me know if you find any errors! Check out this beautiful visualization.

Here is another post on network graphs and trail maps.
Posted by Russell Hanes at 7:12 AM