In my previous post on the brain, cognition, and teaching, I made three main points:
As for the second point, one idea to discuss is a comparison of the math curriculum internationally, to see how different countries spend class time. I would never make an argument for dumbing down the curriculum -- it is about increasing the depth of study of core topics, rather than covering many topics shallowly. I would suspect that other countries' focus on fewer topics has a lot to do with better results, but the data are clouded by an apples-to-oranges comparison. But I could give one example from the U.S. math curriculum: in algebra 1, students study linear equations and quadratic functions; maybe again in geometry; definitely again in algebra 2 at the same difficulty level; and students could still be doing significant remedial work on basic lines and quadratic functions in pre-calculus. While it is good for students to continue to practice with ideas, the problems should be getting more difficult, and anyway, this repetition is only a good strategy if they actually understand an idea and are truly practicing it, not relearning it. There is reason to believe that lines are introduced too early. As another example, geometry is stuffed full of theorems and proofs, but it is far more important for students to understand distance, coordinate transformations, using parallel and perpendicular slopes, and that a line or function or circle's boundary is a really an infinite set of points satisfying an equation.

My third point is one I also make by asking a rhetorical question: What is the best way for a child to play? It obviously makes no sense; children, at different times, need to play in lots of different ways. What is important is the variety. So, what is the best way to teach, to present ideas to children? For different topics, for different children, different methods work "best" -- and variety is a virtue no matter what is best. The better questions to ask are, "When is each method useful?" or, "What are characteristics of good instruction?" These are much more subtle and relevant questions.

My biggest problem with the cognitive research is that it is still at a kind of aphorism level, rather than developing specific vocabulary to help us discuss the characteristics of good lesson plans. It is like reading a home organization book that says, "Buy a spice rack," versus a different book that says, "Buy big jars of garlic, chili, cumin, and curry powders. Don't bother to buy any other jars. Instead, when recipes call for other spices, buy the exact amount you need in the self-scoop spices at your grocery store. You'll pay a higher unit price, but you'll throw away a lot less." While the first book identifies the need -- which is a good first step -- the second book layers on a concept, frequency of use, that allows us to make more sophisticated choices, even if we disagree with its particular strategy. It is worth recognizing that in education, just like kitchen management, any conceptual vocabulary we develop to characterize good lesson plans will have to be relative to the particular students, grade, etc. The frequency of spice use is an important concept to organize your kitchen, but each cook will make different decisions, based on what they actually cook. Good lesson plans will share key characteristics, but there is not one best lesson plan for a given topic.

I can think of three key characteristics of a good lesson plan or of a good curriculum:
Those are your "buy a spice rack" ideas. Now to get into more specific ideas.


First is the retention of key facts and ideas. A large part of retention is practice. I think about the necessary "mass" of practice (how many problems at a time), the spacing or distribution of practice (how frequently problems should return), and the kind of practice task students are asked to do. By kind of task, I am especially focused on how narrowly repetitive the task is. With a narrowly repetitive task, there is a real risk that superficial cues trigger the students' memory. Let's look at an example, the Pythagorean theorem. While this is a concept students pick up quickly, many textbooks give them whole batches of practice problems that look just like this:

There are lots of ways, large and small, to vary the context. First, all three sides could be given, and students asked to determine whether it is a right triangle. (A further exploration into using the Pythagorean theorem to tell us whether a triangle is acute, right, or obtuse is well worth the time.) Second, the students could be given a right triangle where the sides are no longer whole numbers but instead radical lengths. This can trip up enough students to make it a worthwhile review. Third, the students could be given word problems where they need to draw the picture first: "Two boys are flying a kite that gets stuck in the very top branch of a tall tree. The string is 100 feet, and the boys are 80 feet away from the tree. How tall is the tree?"

Fourth and moving onto larger ways to vary the context, students can be given problems where the use of the Pythagorean theorem is just embedded. For example: 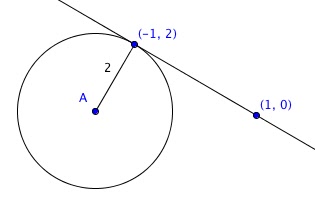 "Given that A is the center of the circle, and that the distance from A to (1, 0) is 3 units, is this a tangent line?" Students need to use the Pythagorean theorem twice, once to find the length from (-1, 2) to (1, 0) and once to assess whether the angle between the radius and line is right. Or this: 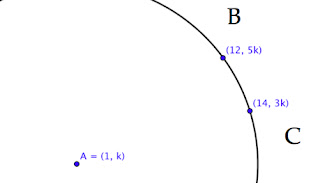 "Given that A is the center of the circle, solve for k." It is worthwhile to note here that explicitness in naming the theorem when discussing the solution -- "Oh, this is a Pythagorean theorem problem" -- will help retention. Or a third example: using the Pythagorean theorem for three-dimensional problems.

Fifth, getting back to explicitly counting or measuring is good. Here is one example:

"(a) Using your compass, find the points on the x-axis 4 units from A. (b) Now find the exact coordinates." Or this: 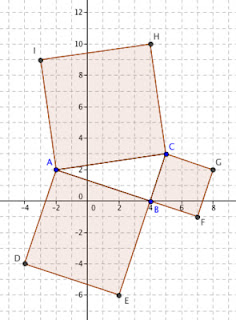 "(a) Find the exact areas of the three squares. (b) How can you use the three areas to write one true equation?" We give our students this problem after they have learned the Pythagorean theorem but before they have worked with radical numbers; they find the areas of the squares by counting grid squares!

In my next and final post in this series, I plan to talk about how one can think about students' conceptual engagement and students' mathematical skills.
Posted by Russell Hanes at 5:29 AM