It should come as no surprise to anyone that the U.S. federal government is in need of serious Constitutional reform, as it is barely functional these days, but most people would probably ascribe the problem to gerrymandering, to executive orders, or to an activist Supreme Court. But the worst problem is the Senate.

And I'm not talking about the filibuster (though by all means, please get rid of the filibuster). The Senate's problems are much deeper. The real problem is that the Senate has become a place for ambitious young politicians to prove they can win statewide elections and boost their brand by single handedly blocking legislation. "Senator" literally implies old, as it comes from the same root as "senile." A Senate of the extremely aged is going too far, but a Senate composed mostly of party elders and states-people would function better than today's Senate's too-ambitious, too-many-extremists mix.

Half the problem is that many senators are more afraid of the primary than the general election because of the dominance of their party in the state. This means more party-line votes in the Senate and less compromise.

There's no way to redraw state lines nor a way to marshal a proportional system (what would that even mean in the Senate, where the states aren't even close to the same population). But there's a way to make most Senators focus on the general election all the same: elect both senators from a state at once.

If states use an instant runoff style method—say, ranked choice—it's easy to fairly choose the top two vote-getters. In some states that are extremely left-leaning or right-leaning, both Senators might be from the same party. But in quite a lot of states—and not just the battlegrounds—the likeliest result is one Senator from each party. The critical waterline would be that two-thirds or more of the voters in a state prefer one party in order to elect two senators from the same party. At this moment, about five Republican and five Democratic-dominated states cross this waterline, leaving the other 40 states as possible splits. Democrats might have a chance to elect one Senator in Texas; Republicans might have a chance to win one Senator in California.

And running both seats in one race would help increase the representativeness of the Senate. Currently, 49% of people in a given state might disagree with both of their Senators, but with a top-two system, people have a greater chance to like at least one of their Senators.

Wait, you ask: How would we divide the Senate races into three classes, so only one-third of Senators are chosen each election? The easiest answer is putting each state into a class based on order of admission to the union: Delaware was first, so class 1; Pennsylvania second, class 2; New Jersey third, class 3; Georgia fourth, class 1, and so on. The order of admission actually divides the country pretty nicely: each class would have states from every region of the country. 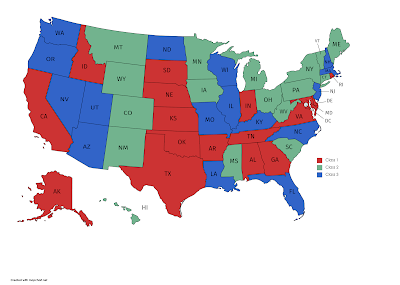 This would help immensely with the too-many-extremists problem, but there also needs to be a solution to the too-many-ambitious-types problem. Whenever there are too many ambitious types jockeying around, it's because there isn't enough work to do. But we can make Senators work harder. The Senate went from the cooling saucer of democracy to a stone-cold funeral slab under McConnell.

The simplest solution: change the Senate's rules so the majority leader can't bottle up everything. Perhaps the Senate should be forced to vote on any bill that passes the House. Maybe the Senate should have to vote on any legislation that addresses an executive order or a Supreme Court decision. A co-equal branch of government shouldn't just twiddle its thumbs. The specifics are less important than the outcome: making the ambitious young things vote on more legislation. Every Senator should have a substantive record on important issues, rather than getting to hide behind the majority leader's apron. The Senate would look less and less like a way to vault your presidential campaign and more like a job that actually requires legislating.
Posted by Russell Hanes at 2:39 PM