I believe in that simple things done right are the bedrock of society: the bus line that's always running; the convenience store around the corner that's never out of bread, milk, or toilet paper, even during the worst snowstorms; or the reliable local newspaper. But there's perhaps no greater collective failure in this country than our massively incompetent ability to name streets properly. Naming streets should be as simple as 1-2-3:

These rules seem clear, right? Rule 1 requires a little definition: a "street" may pass through multiple intersections in a straight or gently curving manner but must actually cross the other street. In other words, a "street" doesn't take a right angle at an intersection. Rule 2 requires a little clarification; let's allow "Maple Avenue" and "Maple Place" as two separate names, provided that they follow rule 3 by being close together--maybe even intersecting. But I don't believe cardinal indicators--"West Maple Avenue" and "East Maple Avenue"--ought to be allowed for separate streets. Those should be reserved for different sections of the same road.

The most common way the rules are violated is that two non-contiguous streets will get the same name. On a map, they're a straight shot, right in line with each other, but maybe there's a natural obstacle in the way, like a river. If I can't drive (or at least walk) from one end to another without turning, it's not one street; it's two. Give the two streets on the opposite river banks two different names.

You may think this doesn't seem like a big deal, but maybe I'll change your mind when I present to you the worst named street in the United States: Old Hickory Boulevard in Nashville, Tennessee. Look upon these maps and despair for your sanity. Our journey begins at Whites Creek, to the north of Nashville. 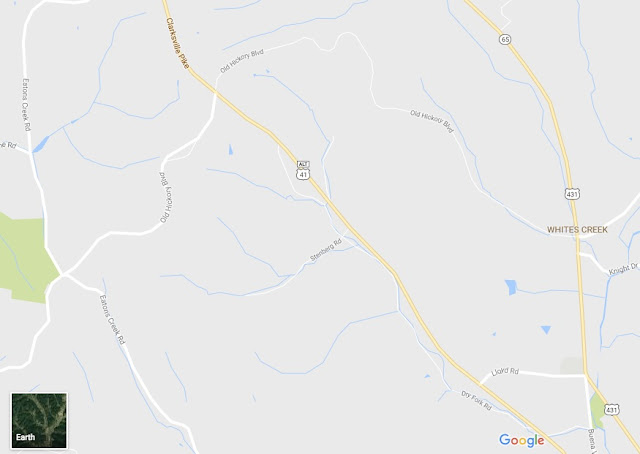 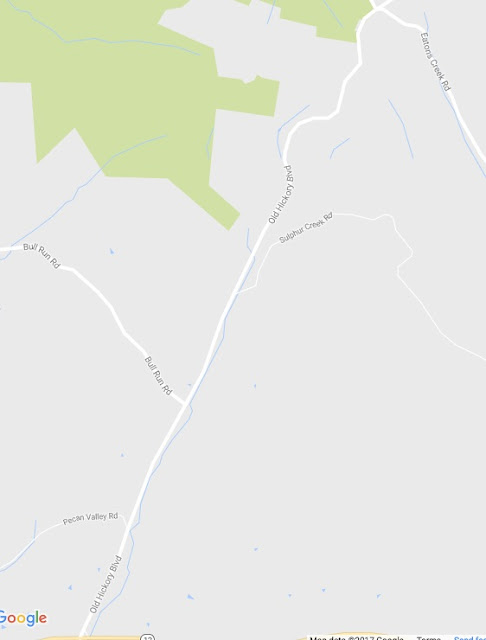 Crossing route 12, you may start to get an ominous feeling, noticing the Cumberland River to both the west and east: 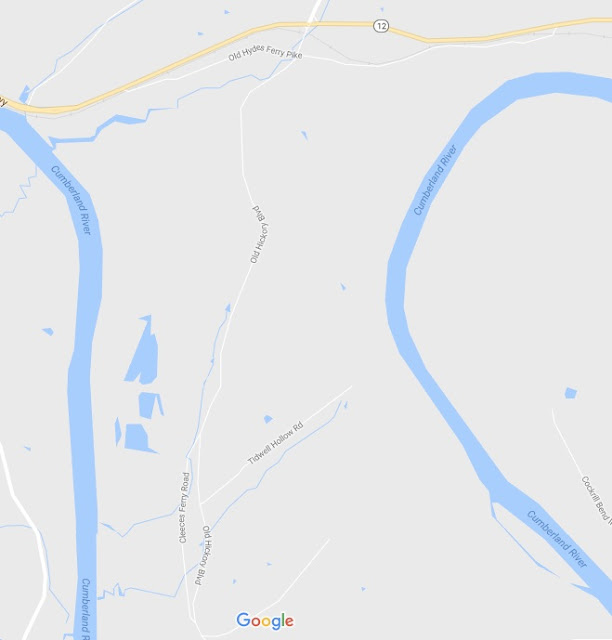 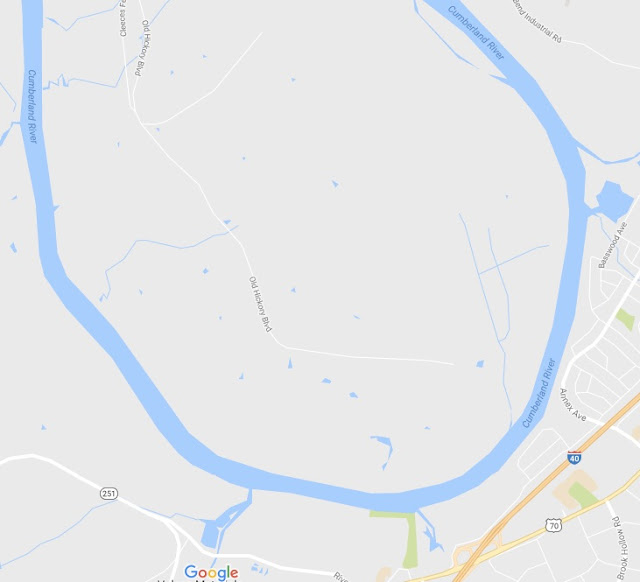 This is west of Nashville. 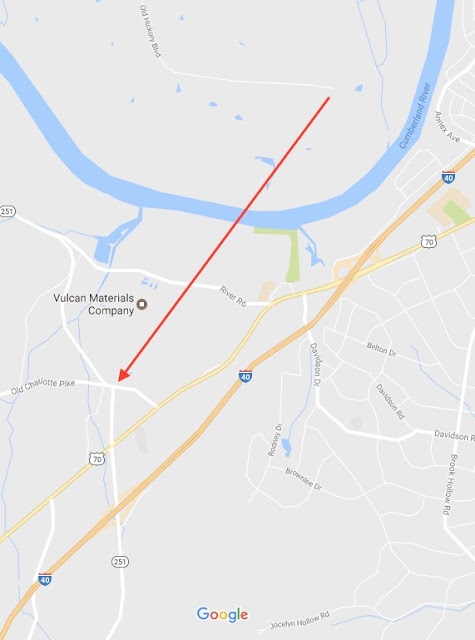 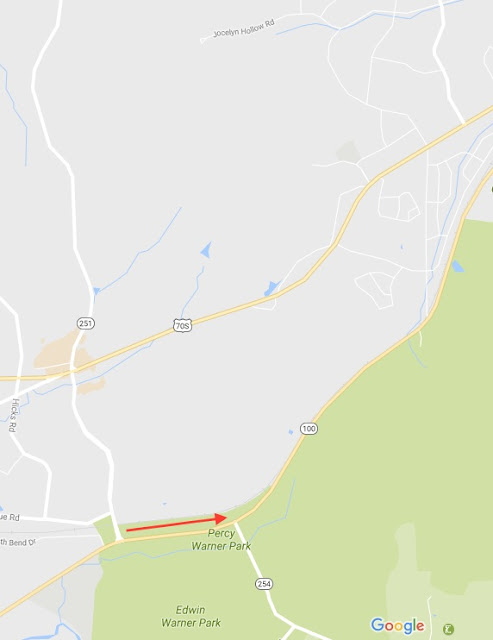 Next, OHB meanders along the south side of Nashville. Granny White is not exactly due south, but pretty close.

True story: I remember sitting in a Pargo's in Brentwood as a child when a tourist came into the restaurant in tears. "I've driven from one end of Old Hickory Boulevard to the other and I can't find this address!"

The manager took one look at her address. "Oh, this address is Whites Creek. That's the north side of town. This here's the south side." Hope you aren't in a hurry...

Now, watch what happens carefully after crossing 41A. 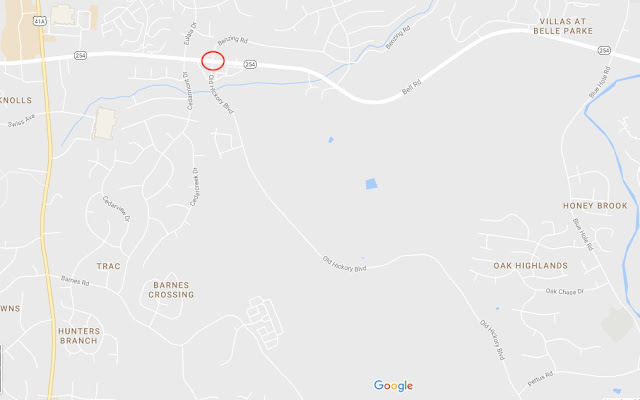 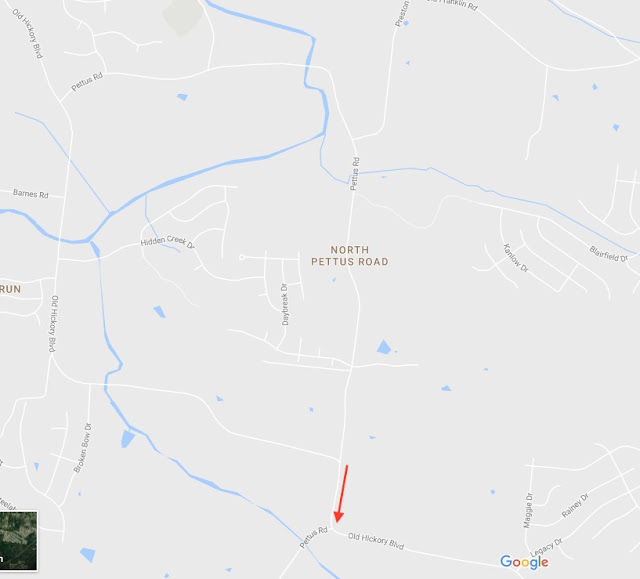 As far as I can tell, that little section there is Pettus Rd. 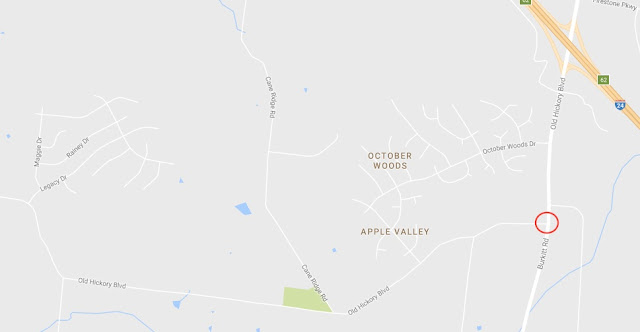 Boom! Another right turn for you! Can't you just imagine a couple driving south on Old Hickory after getting off I-24 and the navicomputer is telling them to turn right onto OHB?

"But TomTom, I'm already on Old Hickory!" as they just breeze right onto Burkitt Road.

Maybe they'd have better luck if they got off I-24 going north on Old Hickory? 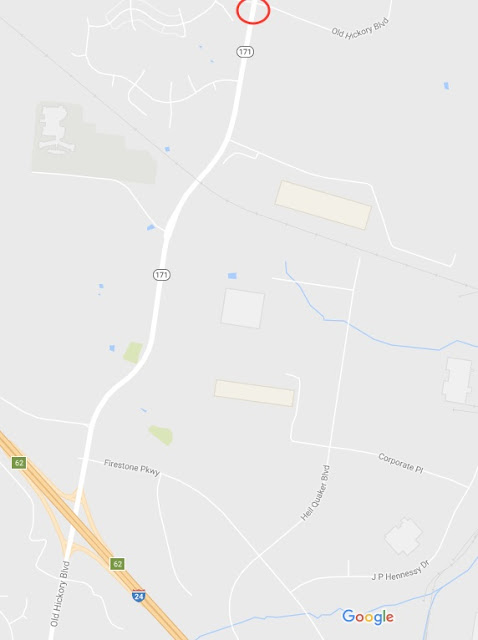 BTW, Route 171 is now the third route designation. So what happens after that right turn off 171? 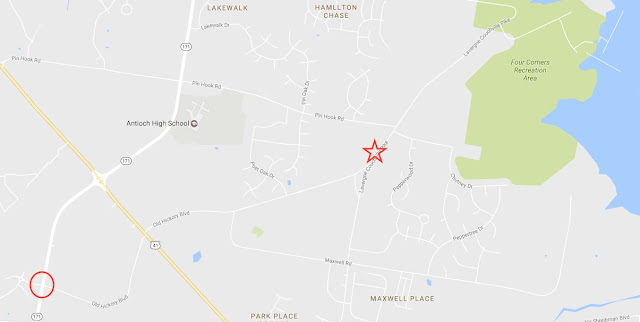 Old Hickory Boulevard vanishes at the star. The road used to continue, but then T.V.A. built a dam on the Cumberland river, creating Percy Priest lake to the southeast of Nashville. A section of OHB still exists under that lake. Does it confuse boat tourists as much as the land sections confuses car tourists?

Wait, Old Hickory was a ring road. Does it continue on the other side? 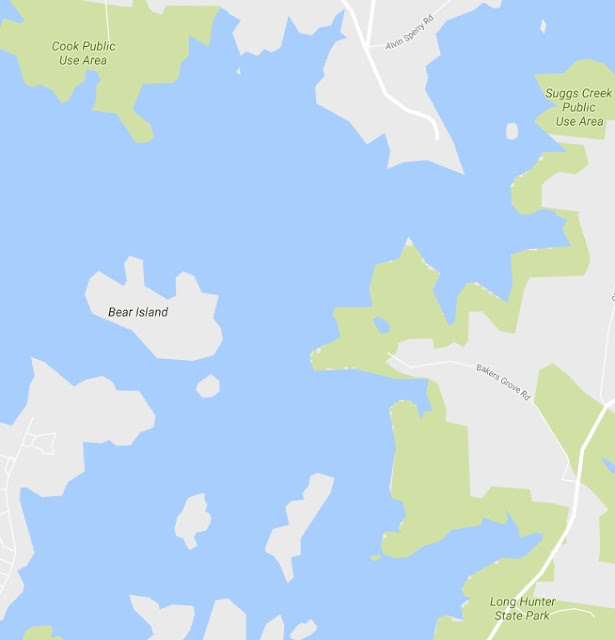 Oh, there you are! 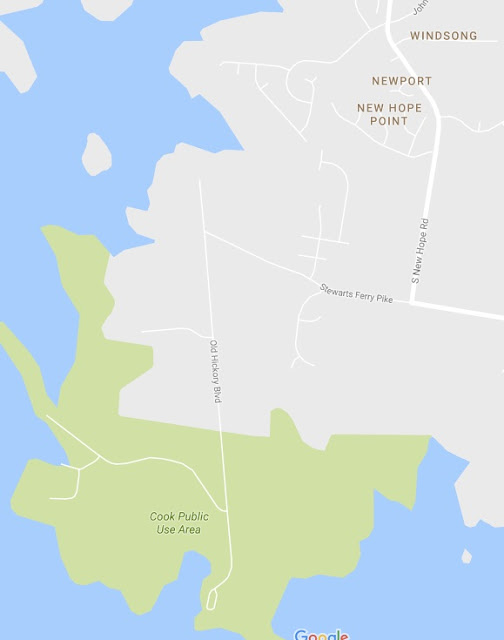 We'll just cross I-40. Now you'll recall that OHB already crossed I-40 once before (when OHB was route 251). That means we're now on the opposite side of Nashville: the east. 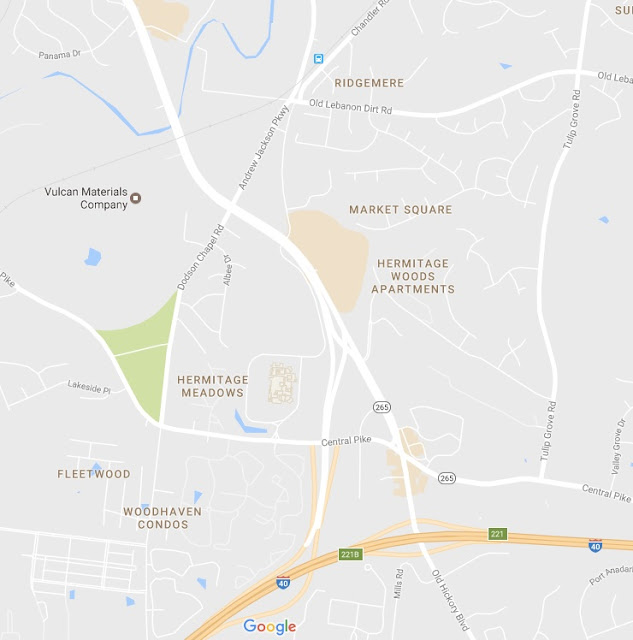 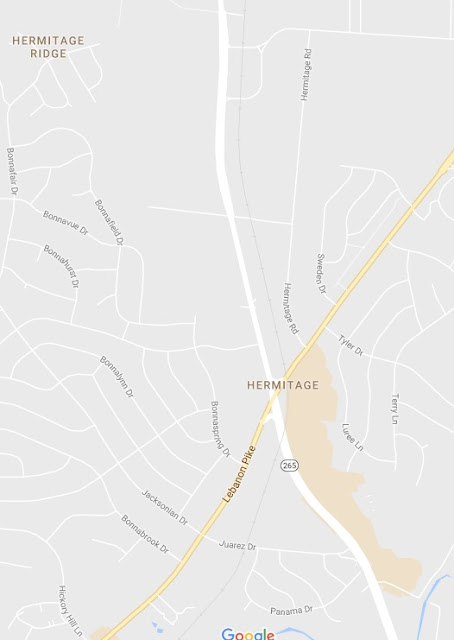 Hermitage, by the way, is the name of Andrew Jackson's house/plantation. Andrew Jackson was nicknamed Old Hickory because he was nuttier than a squirrel's poop.

"Wait, WTF? We're on route 45 now? I thought we were on route 265... We must've changed back there. TomTom still says we're on Old Hickory, hon. Good ole Old Hickory won't let us down, right?"

OHB, now route 45, takes a northwest hook here because of the Cumberland river on both sides. (Like Old Hickory, it's everywhere in Nashville.) Here's the map: 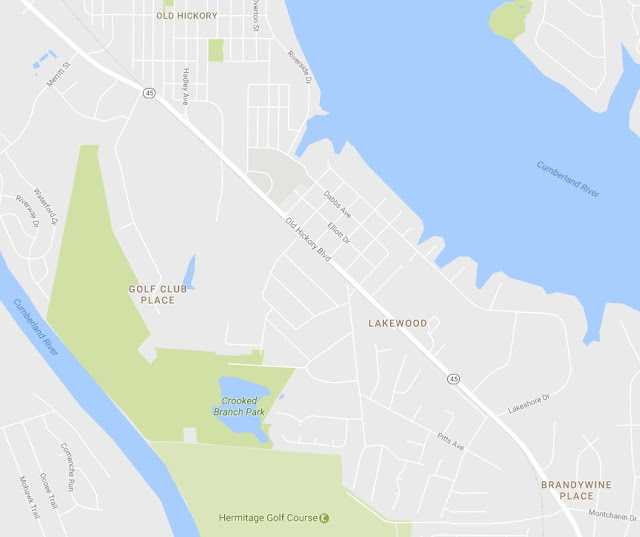 Now, it happens to be worth zooming in a little bit on Lakewood neighborhood first: 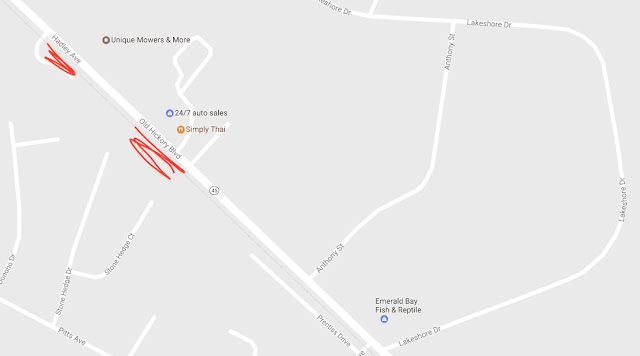 That's right, folks. It has two names. Hadley Avenue and OHB. It's officially broken all the simple naming convention rules and spiked the ball in the end zone.

But now, let's see what happens a little to the north, in Old Hickory neighborhood: 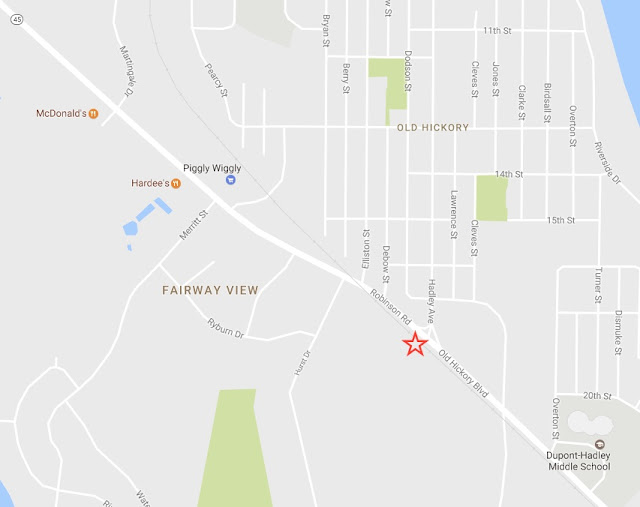 Nothing good for our tourists. OHB just disappears. (Hadley Avenue, the jerk, continues to the right.) Why is the neighborhood called "Old Hickory" when Old Hickory Boulevard doesn't run through it!!

Where did that wascally street go? 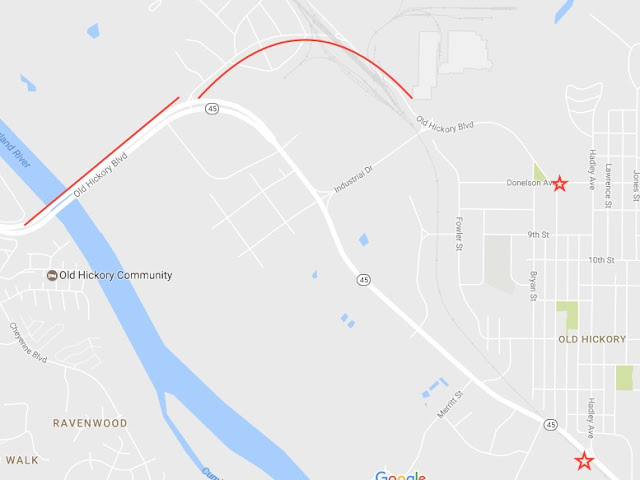 Oh, it magicked itself across its eponymous neighborhood. Right. To be clear, that whole section of route 45 I haven't marked is all Robinson Road. All the time. Sure, the locals who are just running down to the Piggly Wiggly know they turn on OHB which then becomes Robinson. But streets aren't named for locals, are they?

In case you're wondering, Old Hickory Community is where all the lost tourist children go to live, if their mums or dads can't navigate the streets of Nashville and pick them up by closing time.

This one is a doozy. You'll notice an East Old Hickory Boulevard to the south of route 45. That's odd. Why would the East OHB be south of regular OHB?

Because route 45 ain't OHB any more.

East OHB is it. The best part is what happens inside that star. The name jumps from 45 to the surface street--but there's no physical connection. (Also, let's point out the East OHB goes around its corner, and that non-intersection changes its name to Sandhurst Drive.)

"Getting lost is... just a way to have an adventure, dear! Just... um, wasn't planning this and we're low on gas..."
"Oh look, hon, an Old Hickory Community. Maybe they can help us!"

If there's an East OHB, is there a West OHB? Indeed there is:

but you gotta take another jump.

OHB is nearly out of tricks, though:

At the star, it changes names from West OHB just back to plain vanilla Old Hickory Boulevard. BTW, crossing I-65 a second time means that we're on the north side of Nashville again.

A few more miles--crossing I-24 a second time--and we're back to Whites Creek:

You can almost hear the tourists wailing: "I just wanted... [sob] just to see... some country music stars' homes! I didn't want to drive all around creation!"
"And where are our children?!"

Let's do the numbers:

Route designations: Five (251, 254, 171, 265, and 45)
Two street names simultaneously: Yes (OHB and Hadley)
Street takes a right turn: Three times (all between 41A, I-24, and 171 in southeast Nashville)
Jumps over water: Three (Cumberland river, Percy Priest lake twice)
Jumps over other roads: Four (251 to 254; over Pettus Rd.; from route 45 to East OHB; from East OHB to West OHB)
Jumps over neighborhoods: One--but double points because it's eponymous
Switching names while driving down the same street, not otherwise covered: Two (West OHB turning back into OHB; East OHB turning into Sandusky Rd. The West OHB to regular OHB could be OK, I guess... No one is going to get lost if the numbering makes sense... which it doesn't.)

I think this deserves a total of 15 naming violation points: +1 for two names simultaneously, +3 for right turns, +9 for jumps, +2 for two name switches. (Or maybe 14 points, if you're cool with West OHB to OHB.)

I defy anyone to come up with a worse named street in the U.S. Map-based proof required.

BTW, in case you couldn't tell, I'm originally from Nashville. No offense is intended; I think it's fair to poke a little fun at your hometown.
Posted by Russell Hanes at 6:20 PM