Study of speaker points and power-matching for 2006-7

The results of the experiment showed that, even after only six rounds, median speaker points is a more accurate measure of a team's true strength than its win-loss record. Furthermore, the results showed that high-low power-matching improved the accuracy of the win-loss record as a measure of strength (but only to the same level of accuracy as median speaker points) and high-high power-matching worsened its accuracy.

Description of the study


This experiment lead me to do an observational study of the 2006-07 college cross-examination debate season. I analyzed all the varsity, preliminary rounds listed on debateresults.com: 7,923 rounds; 730 teams. This was the last year when every tournament used the traditional 30-point speaker point scale. Each team was assigned a speaker point rank from 1 (best) to 730 based on its average speaker points. Each team was also assigned a win-loss record rank from 1 to 730 based on the binomial probability of achieving its particular number of wins and losses by chance. Thus, both teams that had extensive, mediocre records AND teams with few total rounds ended up in the middle of the win ranks.

Next, I analyzed every individual round using the two opponents' point ranks and win ranks. For example, if one team had a good point rank and one a bad point rank, then of course the odds are quite high the good team would win. On the other hand, if the two teams were similarly ranked, then the odds are much closer to even. Using the point ranks, I did a logit regression to model the odds for different match-ups. And I also ran a separate logit regression for win ranks. Here are the regressions: 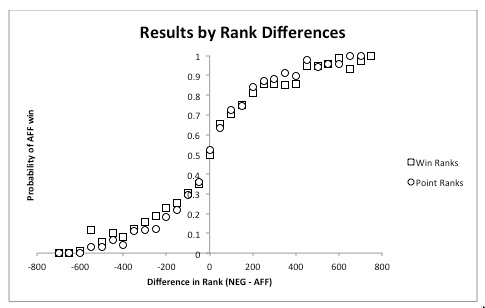 The horizontal axis shows the difference in the ranks between the two opponents. The vertical axis shows the probability of the Affirmative winning. For example, when Affirmative teams were 400 ranks better (smaller number) than its opponent, they won about 90% of those rounds. These odds are based on the actual outcomes observed in the 2006-07 college debate season.

First, note how similar the two logistic regressions are. A difference of 100 win ranks, say, is as meaningful for predicting the actual outcomes as a difference of 100 point ranks. Using the point ranks regression "predicts" 75% of rounds correctly, while using the win ranks regression "predicts" 76% correctly. Both regressions "predict" each team's win-loss record with 91% accuracy. (This discrepancy between 75% and 91% occurs because, overall, many rounds are close and therefore difficult to predict -- but for an individual team that has eight close rounds, predicting a 4-4 record is likely to be very accurate.)

What is impressive to me is that, even without correcting for judge bias, the two methods are very comparable. Bear in mind it is NOT because every team receives identical win ranks and point ranks. In fact, as you will see in the next section, some teams got quite different ranks from points and from wins!


In the second part of my analysis, I looked at how power-matching influenced the results. I could not separate out how each round was power-matched because that information was not available through debateresults.com. But college debate rounds tend to be power-matched high-low, which is better than power-matching high-high (as my experiment showed). I eliminated teams with fewer than 12 rounds because they have such erratic results. This left 390 teams for the second analysis.

The goal of power-matching is to give good teams harder schedules and bad teams weaker schedules. Does it succeed at this goal? 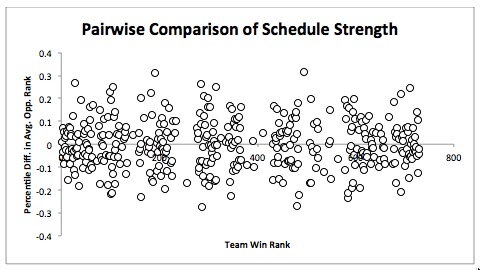 Finally, I performed a regression to see whether these differing schedule strengths is the cause of the discrepancy between win ranks and point ranks. 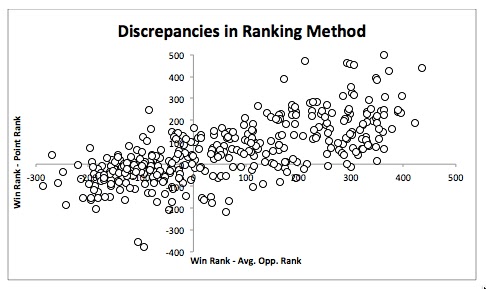 Teams in the upper right corner had easier schedules than they should have (under power-matched) and better win ranks than point ranks. Teams in the lower right corner had harder schedules than they should have (over power-matched) and had worse win ranks than point ranks. Having easy schedules improved win ranks; having hard schedules worsened win ranks. The effect is substantial: r^2 is 0.49. Of course, some of the discrepancy between the ranks is caused by other factors: random judging, teams that speak poorly but make good arguments, etc. But power-matching itself is the largest source of the discrepancy.

Given that the schedule strengths varied so much, this is a big, big problem. I know that tab methods have improved since 2006-7 and now factor in schedule strength; this analysis should be rerun on the current data set to see if the problem has been repaired.

One could argue for power-matching on educational grounds: it makes the tournament more educational for the competitors. However, it is clear from this analysis that power-matching is not necessary to figure out who the best teams are. In fact, it might actually be counterproductive. Using power-matched win-loss records takes out one source of variability from the ranking method -- judges who give inaccurate speaker points -- but adds an entirely new one: highly differing schedule strength!
Posted by Russell Hanes at 6:38 PM