There are a lot of ways we could alter with the U.S. government to improve it:


But an easy-to-make reform I have thought about is to improve the presidential primary processes. One problem is that states want to be first, or failing that, as early as possible. This is for each state to maximize its own influence, but this creates an "arms race" among the states. There needs to be a national, coordinated solution that gives each state a fairly equal chance to each state to have a maximum impact.

One possibility is to draw states at random. Two states go every week for a 25-week process - about as long as the current six- to seven-month-long primary system. This is fair, but the only problem is that California or other big states could come early. The smaller contests really ought to come first. The small contests allow for a wide field and enable less-well-funded candidates to gain exposure. Some unheard of candidates might do well and attract support and funding and be ready to move on to bigger contests. But candidates who could not finish in the top half of smaller contests run out of chances and are eliminated. Allowing large contests at the beginning would be a prohibitive barrier for all but the most well-known, well-funded candidates.

My idea is to organize primaries into ten slots, each separated by three weeks. This 30-week process would start in January and finish in July, just before August conventions. The sensible thing would be to order the primaries into ever-larger blocks, so that the smallest contests are first and the largest contests come last. Here's one schedule I made up: 5, 6, 9, 13, 20, 31, 49, 78, 125, and 202. There could be a drawing of states every presidential election, and each state could be assigned in order to the earliest slot that is still available. For the first nine slots, the numbers are caps. If a state would push the number over the cap, it must go into a later slot. The last slot does not have a cap, so any state that cannot go in the first nine slots goes in the final slot.

Big states can only go at the end by definition. California can only go in slot 8, 9, or 10. However, California would rather get a good lottery number and go in slot 8 (when it would dominate the candidates' attention for three weeks) than in slot 10 (when it would be only 55 out of about 202 votes and be a much smaller part of the candidates' attention). Small states with good lottery numbers that year will go early and will dominate the conversation. It is bad luck for small states that get a bad number; they will be ignored in a big vote slot. It is clear that the large states have less variation in "dominance" than the small states do. But how much less? Are small states better off, on average, under this arrangement? This calls for a simulation. I ran 200 trials. Here are the results. 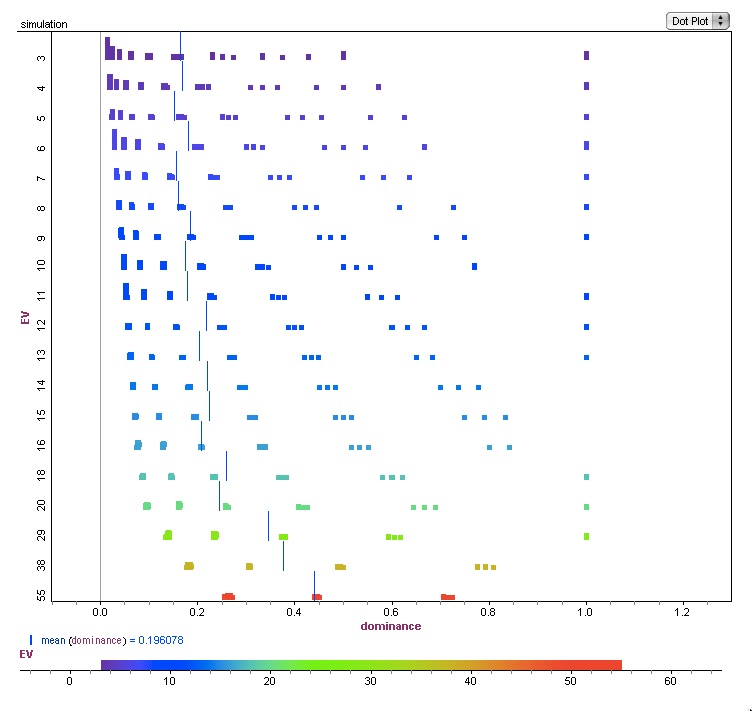 The average dominance is just under 20%, meaning that each state represents, on average, 20% of the Electoral College votes available in the given slot. But notice how even the small states have, at times, 100% dominance of the slot. Notice how the small states, mid-size states, and even some of the larger states have averages that are right around 20%. It is only the very biggest states -- Florida, New York, Texas, and California -- for which average dominance of their slots is above 20%. One could play around with the numbers a bit. For example, dropping slot 7 to a 48 would depress Florida's and New York's slightly too high chances a little (no longer could they share the slot if a 20 EV state got there first, so their odds would be slightly lower for this outcome). But my first attempt represents quite a substantial flattening out; each state has a reasonable chance of influencing the selection of the presidential candidates.

UPDATE, March 23, 2019: This article in fivethirtyeight takes a very different approach to re-ordering the primaries: they look at how similar a state's electorate was to the national Democratic electorate as a whole, then put the most similar states first. Of course, this would require (probably) that Democratic and Republican primaries go in a different order. There's a downside in that you can't get cross-over primary voters. But fivethirtyeight's analysis exposes definite problem with my proposal--none of the small states are especially representative of the nation as a whole.

I have two responses, but neither of them is completely satisfying. First: we can hope that clusters of small states can be, on average, more representative. Iowa and New Hampshire might be too white, and South Carolina more African American, than the nation as a whole, but the average of the three together is closer to the national average. True, but not perfectly close. The average of these three states in particular is still far less representative than Illinois of the national Democratic electorate. And if we want to try to randomize the selection of small states, then there are many combinations that are even less representative on average. Fundamentally, a "small states first" rule must involve some trade-off with a "most representative first" rule.

Second: maybe we're not so concerned that the initial states are representative. After all, I am making the case that the early states purpose is to keep costs low (by being a small state with cheap media markets) so the barrier to running for President is negligible AND then to narrow down the field by eliminating non-viable candidates. The low-performing candidates drop out, not because of money, but because they can't win votes; the high-performing candidates gain new enthusiasm and fundraising when they win early states. The real question is whether we think low-performing candidates can't win votes because they're just bad candidates--or because the early states' demographics tilt the playing field against them. The reality is probably a mix of the two effects, but I lean toward the "bad candidates" explanation. Yet I can't rule out the biasing effect either. There's no doubt that early states lean toward rural populations.

Perhaps the best solution is to pair or triple states up so as to "average" out to national demographics: e.g., Massachusetts and Mississippi. The randomly draw out the 25 pairs (or sixteen triples and one pair), using the same sort of ordering method I discuss above. I'm not sure which combinations would be made, so I'm not sure how few electoral votes the smallest pair would have, or how many electoral votes the largest pair would have. But perhaps it would work.
Posted by Russell Hanes at 2:57 AM