I did not realize this, but all the conics in a family can be wrapped up in one neat polar equation:


Tip of the hat to Sam for this idea.

Sweet! You can see the shape go through hyperbola, parabola, ellipse, then circle.

The parabola is not too bad. It happens when k = 1. That means, in parametric form, that


The trick turns out to be squaring the y parametric equation:


We already know this has to be some form of x, so it turns out to be

But it turns out that those are the degenerate forms. The real work is trying to prove that the form given creates hyperbolas when k > 1 and ellipses when 0 < k < 1. Luckily, the same method works for both. Given that in both the hyperbola and ellipse case, the center of the conic is at some (h, 0), we are looking to simplify our polar form into: . For the hyperbola, a will be negative; for the ellipse, a will be positive. The algebra gets a bit tricky, but the idea is simple enough.

Substitute in for x and y:


Then show that, by picking the right values for a, c, and h, it is always possible to get the same ratios of , cosine, and constant in the numerator as the denominator. In other words, one needs to pick the right values such that


The trick is that one can combine and to get rid of the term. Then one is left with the system of equations that:


Solving this by linear combination is not too daunting, actually. For a final answer, one ends up with:

Which is all rather cool. I later realized that k is about the slope at which one cuts a plane through a cone: 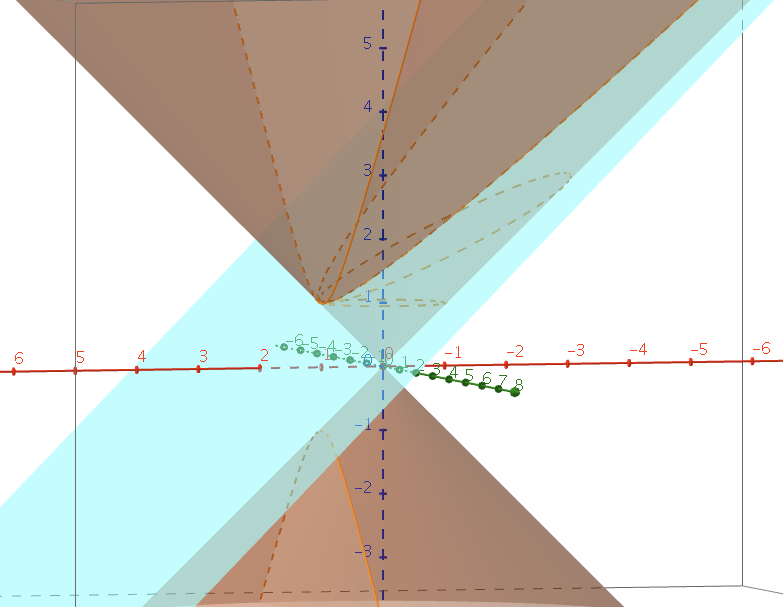