Gerrymandering is a real problem; districts are bizarrely shaped, but more important, political parties in some states have really been able to tilt results. Vox has a list of the most brazen examples. The worst might be Ohio: 52% of Ohioans voted for Republicans for the U.S. House, but Republicans won 12 out of 16 seats. That is some appalling political bias!

So I read with some curiosity three methods people had proposed for "hands-off redistricting." The idea is to let a computer algorithm draw the district lines to avoid politicians' interference. The three methods are shortest split line, OPRA, and Brian Olson's unnamed method. I think they represent sincere, well-intentioned, deeply flawed remedies to gerrymandering.

Let me explain each method as best as I understand it. The shortest split line divides a state into several districts by successive straight cuts. If the state needs two districts, the shortest straight line (on the globe -- so, technically a great circle) from state border to state border that divides it into two equal population districts is chosen. If a state needs more than two districts, the cuts are made successively. The first cut might divide the state 2:1, then the second cut divides the double-sized district into two. (The second cut can use the first district boundary -- the first cut -- as its starting point.) Voila. Three even sized districts. It is easy to understand, and given the state of computers and census block data, easy to implement.

OPRA has a simpler criterion -- shortest perimeter -- but requires more computer time to test out all sorts of different possibilities. If a state needs two districts, the optimal solution is the one with the shortest boundary between them. It might be a straight line, a circle, or a zig-zag shape -- whatever is the shortest one that divides the state into two equal population districts is chosen.

Brian Olson's method is a bit more confusing. He says the criterion is minimizing distance from the center of each district -- which should push the districts into roughly circular, equally sized shapes (corners increase average distance a lot). However, the examples he posts shows, yes, roughly circular districts, but of quite varying size. The small districts are dense, but they have a much smaller distance to center than the big districts. So there must be something about how he is "averaging," so to speak, from district to district. Anyway, it sounds like his method soaks up quite a bit of computer time, but it is still quite manageable.

I read a criticism of these kinds of methods that stated the authors were fetishizing pretty districts and ignoring important qualities for a good district, such as keeping communities of interest together. This criticism misses the mark mostly. The purported rationale for hands-off redistricting is avoiding bias. Do they succeed on their own terms?

Well, no. Free from political interference, yes. Free from meddlesome politicians, yes. Free from human judgment -- once we pick the method, yes. But not free from bias, if we mean a systematic error from the truth.

Consider Ohio. With hands-off redistricting, the state that voted 52% Republican might still elect ... 12 out of 16 Republican representatives. Or 4 out of 16. It depends on the method.

Editing note, 10/10/14: I realized, four months after publishing this, that I got the conclusion backwards. My original post said split-line districting and Brian Olson's method would have a pro-Republican bias, and OPRA would have a pro-Democratic bias. This is the opposite of what would happen; I've corrected the post and explain below.

The split line redistricting is almost certain to have a pro-Democratic bias. (Yes, I mean even if the process is 100% handled by a computer.) Here's why: 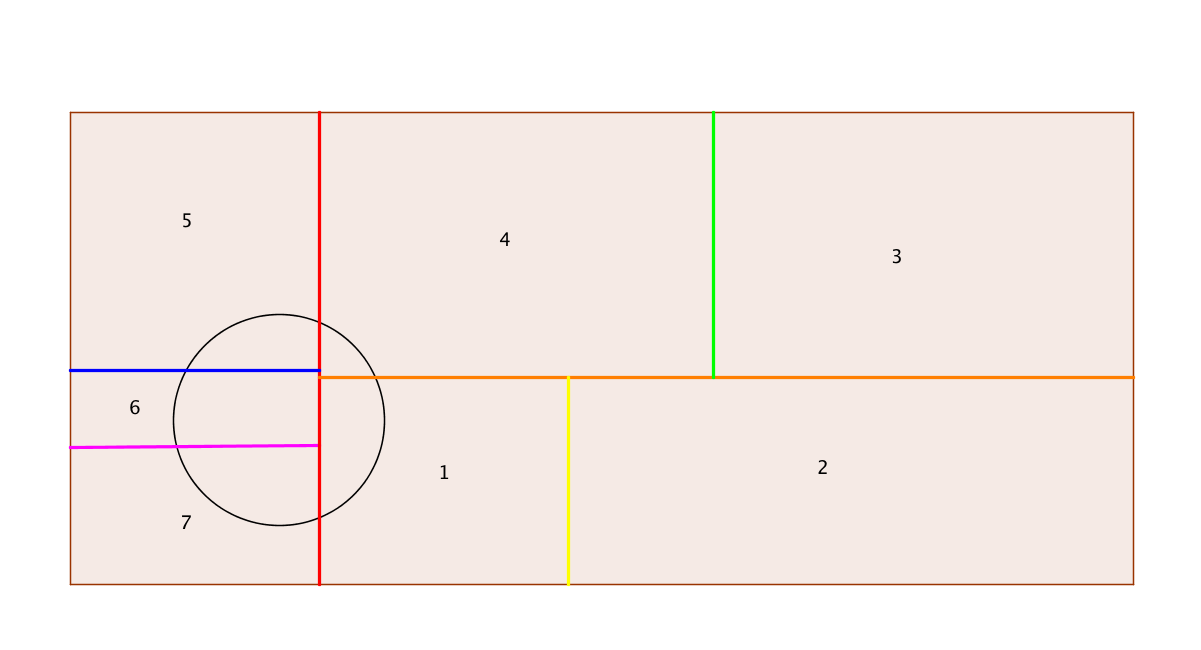 Districts 1, 5, 6, and 7 are majority urbanites, with number 5 by the slimmest margin. I checked all of this with detailed area and population calculations. Now the state, instead of going 3:4 for Democratic candidates, will go 4:3 for Democratic candidates. Straight split line are likely to slice THROUGH cities and create very, very homogenous rural districts. And packing rural districts like 2 and 3 are the key strategies in a Democratic gerrymander.

The same exact thing happens with Brian Olson's method. I had to look really carefully, since his maps do not indicate cities, but once I overlaid them with a regular map, I could see it. Look at Virginia for example. Richmond is split up into three large, mostly rural districts. Ditto for the Virginia Beach - Newport News area.

OPRA, on the other hand, is most likely to create a Republican bias. Here's why:

Imagine a state with one large city. The shortest way to draw the boundary is to draw a large, circular boundary around the city, then divide it into different districts. This will pack most urban voters into a very few districts. This is a key part of a Republican gerrymander.

A pair of political scientists wrote about the idea that algorithmically-created maps might still have political bias, looking at Florida's U.S. congressional districts. Here's their own summary, and here's the academic paper. It seems like they used to similar algorithmic methods that both yielded Republican bias.

In summary, hands-off redistricting algorithms are free from political interference but could still yield substantial political bias. Before I signed on anything, I would want to see substantial simulations that indicated the proposed method was actually neutral. But in truth, all these methods are just a really complicated non-solution to the real problem. Count me out.

The best solution is multi-seat, proportional representation.
Posted by Russell Hanes at 7:13 AM