A Numbers Game did some interesting work on the side bias of various college topics, here, specifically, controlling for team strength. In that spirit, I decided to use a different method and see how the results compared.

I used a matched pairs method: for each team, there is a matched pair of results: that team's win percentage on the affirmative, and that team's win percentage on the negative. If the two results show no difference, then the team did equally well (or equally poorly) on both sides of the topic. If the two results do show a difference, there are three possible explanations: (1) the team isn't equally strong on both sides of the topic, e.g., the 2A isn't as good as the 2N; (2) the team hit an unequal set of opponents on the two sides; or (3) there is side bias on the topic. When one looks at all the teams on a topic, (1) is unlikely because the whole point is to control for team strength by assuming that the average team is equally strong on either side, (2) cancels out when one looks at the entire pool, and (3) is left as the most plausible outcome. Although this method still relies on the assumption of invariant strength (that a team has a fixed strength, the same on both sides of the topic, unchanging throughout the year), so does any other method that attempts to control for team strength. With those disclaimers, here are the results: 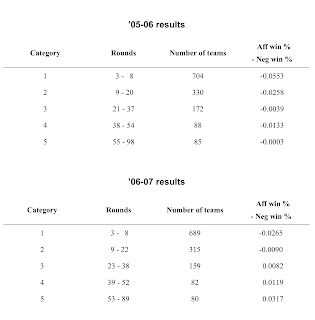 Category 1 is roughly the 0-50th percentile (in terms of rounds of competition); category 2 is 50-75th; category 3 is 75-87th; category 4 is 87-94th; and category 5 is 94-100th. You can see the results clearly in both: the less experienced teams had greater success on the negative; the more experienced teams did better (relatively or absolutely) on the affirmative. The reason why the originally calculated affirmative win rate was too low was because there are so many more less experienced teams that bring down the average matched comparison -- but they debate few rounds, so they do not have a big effect on the total ballot count. (I looked at the same tables for other years, but there were no patterns as clear as '05-06 and '06-07.)

One final note: All of the whole years' analyses are significant to at least the 95% level except for '06-07, which is only significant at about the 85% level. I used a 1-sample t-test, since the distributions are more or less normal: 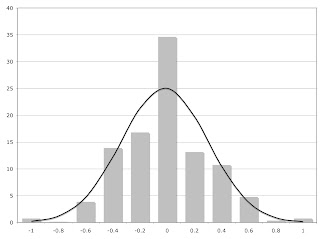 (This is '08-09, but all the distributions look like this.) In fact, the distribution looks a little tighter than the normal curve (given the population's mean and standard deviation), since so many teams have 0% aff-neg win spread. The cumulative frequency graph is even more persuasive: 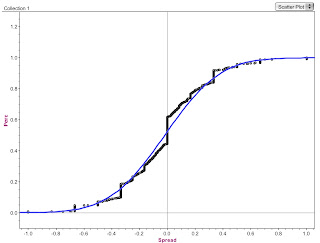 Based on A Numbers Game's question, I created a Lorenz curve for '08-09: 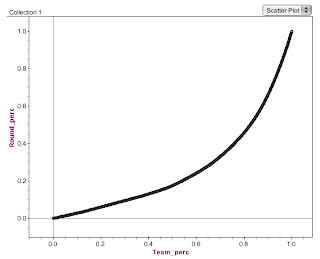 A few data points in words: