You might think, since graphs are a complete mapping of all the preliminary round results, that they could be used to rank all the teams at a tournament from first seed to worst. However, if you tried to use a graph this way, you'd run into three different problems. Graphs are best for illustrative purposes (and one alternative use I'll suggest at the end).

The first problem with trying to use a graph to seed the teams is that you still need a lot of tiebreakers. Here's a simple example: 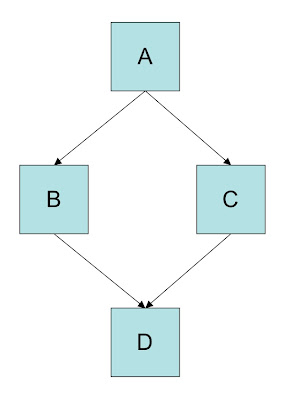 As indicated by the graph, team A beat B and C, and teams B and C both beat D. The problem is that B and C can't be ranked against each other from this information alone. Given the results, the final rankings must contain the sequences {A, B, D} and {A, C, D}, but both {A, B, C, D} and {A, C, B, D} satisfy this. The problem is that, except for round robins, there will always be teams that didn't meet at the tournament, and thus, pairs of vertices without edges.

Ok, so, you still need tiebreakers, but a network graph as a ranking mechanism presents a second, bigger problem: "contradictions." Let's say we run a really small tournament, and we must force A and B to debate twice. Here's one possible outcome that creates a contradiction: 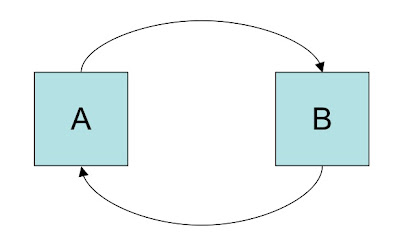 A (aff.) beat B, but B (aff.) beat A. If we try to use the network graph to rank these two teams, we'd be forced to give two contradictory statements. (It's worth remembering that a team's strength is not invariant: teams can be better on one side than the other, they can have off rounds or lucky rounds, and judges also play a factor.) This is simple enough to resolve: we can use speaker points to rank one team higher than the other. Here's a slightly more complex version of the same problem: 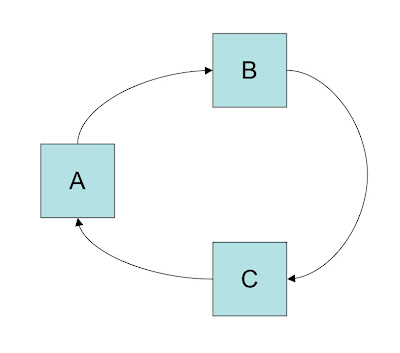 A beat B (rd 1), B beat C (rd 2), and C beat A (rd 3). There's a contradiction here also. It will have to be resolved by "upsetting" one result, that is, a team must be ranked below an opponent whom they beat. For example, a final ranking might be {A, B, C}, which means that C's victory over A was "upset" or "overruled" because A had more overall wins, better speaker points, etc., than B or C. Bear in mind that doing a graph didn't create this problem; it merely exposed it. We're mostly oblivious to it because cume sheets show wins, points, etc., and don't provide a network graph. Look carefully through the results of nearly any tournament, and I'd be willing to beat you can find at least a few teams who are ranked below (based on overall record, speaks, etc.) an opponent they beat. Here's another example: 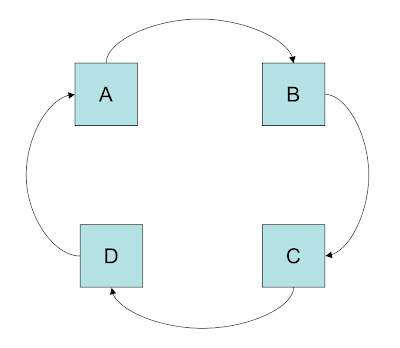 The third problem with using a network graph as a ranking mechanism is perhaps its biggest, if not mathematically, then for the debate community to stomach: 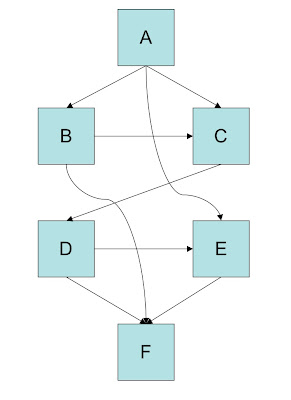 Notice the problem? There are no cycles; everything flows in only one direction. The rankings, according to the graph, are unambiguously {A, B, C, D, E, F}. Here it is again: 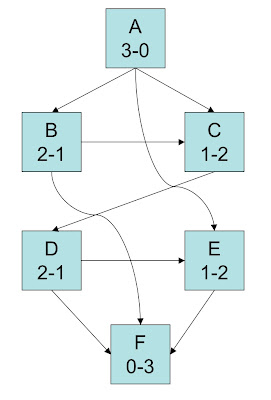 C beat D, but at any tournament, D would be ranked higher, because C is 1-2 and D is 2-1. In the situation I graphed, C is the better team but had a tougher schedule. (It's also possible to create an example in which D is the better team but just had an off-round or a crazy judge.) There's no cycle in the graph, so there's no need to have an upset, but I believe every debater and coach would say D should be ranked higher. Total wins as the first method of ranking is sacrosanct to the debate community, and with good reason. Total wins is clear and unambiguous; a network graph is abstract and complex. I know I would never want a tournament to start interpreting results with a network graph; it would create too much room for error when deciding breaks.

This last problem is insurmountable. I think the lesson is that we need to take every effort to make schedule strength more equitable, but there's no mathematical way to jigger results to somehow weight or re-interpret an unfair set of pairings. The cat's out of the bag, and we just have to say, "Sorry, tournaments aren't always fair," at that point. The bottom line is that network graphs will never and ought not be used for tournament rankings. But there's is an alternative use for graph theory: as a tiebreaker at round robins.

Let's say a six-team round robin has these final results:

There's a three-way tie for second place. My suggestion is that round robins can use an idea from graph theory as the first tiebreaker, before resorting to speaker points. I believe that direct results ought to be respected as much as possible, and in round robins, you have direct results for every head-to-head match up. Who cares that team C spoke prettier than B or D if C lost both of those rounds? Here's the graph of this hypothetical round robin: 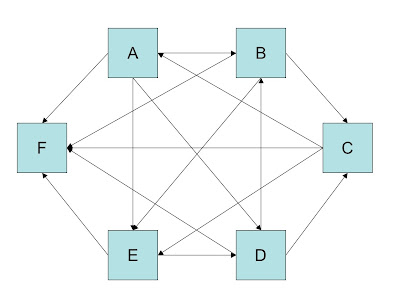 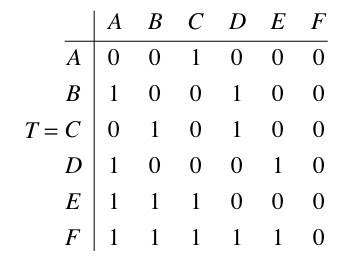 A column represents a team's wins; a row, its losses. Hence, reading down column A, you see that team A beat B, D, E, and F; reading across column A, you see that team A lost to C. The adjacency matrix contains all the information that the graph does; it's merely another representation of the same data. You might also notice that there's an easy way to double-check the matrix: 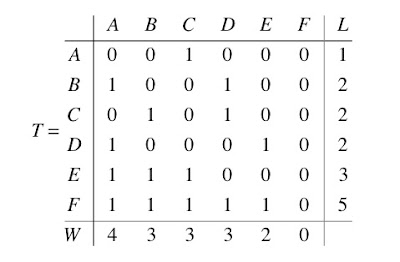 You can add to make sure you have the right number of wins in the column and losses in the row for each team. (The adjacency matrix is easy to do for multi-ballot round robins; just put the ballots won into the correct spot for each team.) 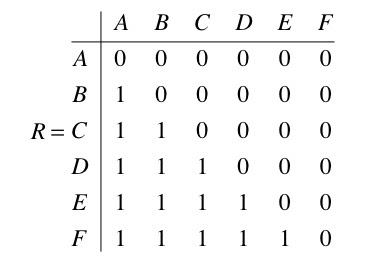 The matrix shows results that would be perfectly consistent with the ranking. Now we can calculate a score for how well this ranking corresponds to the actual tournament results: 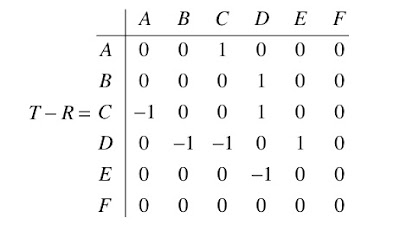 How do the other rankings compare? Using the same method for each "prediction," the rankings can be compared:

The best ranking is obviously {A, D, B, C, E, F}. It upsets the fewest direct results. In fact, the two that are upset make perfect sense: 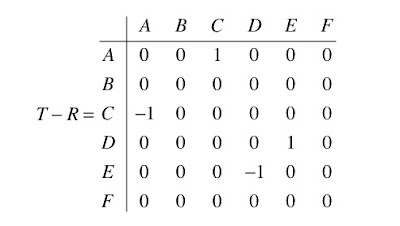 that C (3-2) actually beat A (4-1) and that E (2-3) actually beat D (3-2). In a sense, these were unavoidable (or you might even say real) upsets, not artifacts created by a poor ranking. Anyway, the point is, the three-way tie could be broken in this case without resorting to speaker points. This algorithm would be relatively easy to program into a tab program for round robins.

Of course, some ties are cannot be resolved by this method, namely, if the ties are really contradictions created by cycles. There's still a place for speaker points and other tiebreakers.
Posted by Russell Hanes at 4:00 PM