1) At what (x, y) coordinates do the tracks cross?
2) If trains are placed at an arbitrary point on each track but travel at the same speed, will they ever collide?

To answer question 1, the Cartesian equations turn out to be the easiest way to go. The circle can be written as:

Or, alternatively, the ellipse could be:

At this point, most students recognize that the circle and ellipse equations can be set equal to each other, and they can solve for x or y (whichever is easier) in terms of the other variable, and substitute back in. And that strategy works remarkably well for these equations because the x squared terms cancel out.

To answer question 2, parametric equations are the only way to go. Indeed, a good representation can make the answer to the question obvious and lets one make an even bolder statement. The circle is easy enough to write:

The ellipse requires a little more effort. The problem says the trains are going at the same speed, but they're running on different length tracks. Specifically, the circle track length is 8 * pi, and the ellipse is approximately (square root 40) * pi in length. That means that the period of the elliptical-track train must be adjusted; that train will complete nearly 1.3 revolutions for every 1 the circular-track train completes. 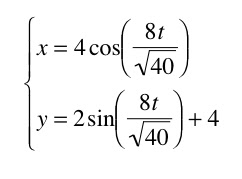 Now, you have something to graph and see what the paths of the trains look like. Comparison of the x-coordinates -- 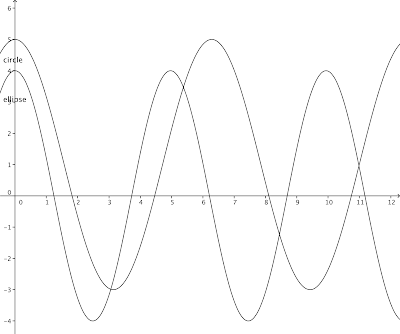 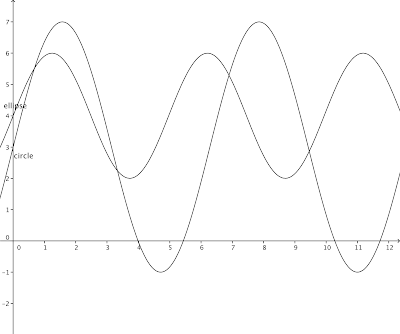 shows that the trains will indeed cross paths (where the equations cross at the same time t on each graph; equations crossing on the x graph only or y graph only would show where they were on roughly opposite sides of their respective tracks). It becomes obvious with this representation that of course they cross paths because they have different periods (travel time for one circuit around the track). In fact, this representation should make it obvious that "ever" is too weak a question -- they must cross paths, no matter where their starting places. It is especially neat for students to see that there's no least common multiple of the periods possible; that is, the combination of the two functions is non-repeating. Take t to infinity and you'll never see the two trains at the same time in the same places they were at t = 0. Neat.
Posted by Russell Hanes at 5:26 AM